A day in the life at keylight 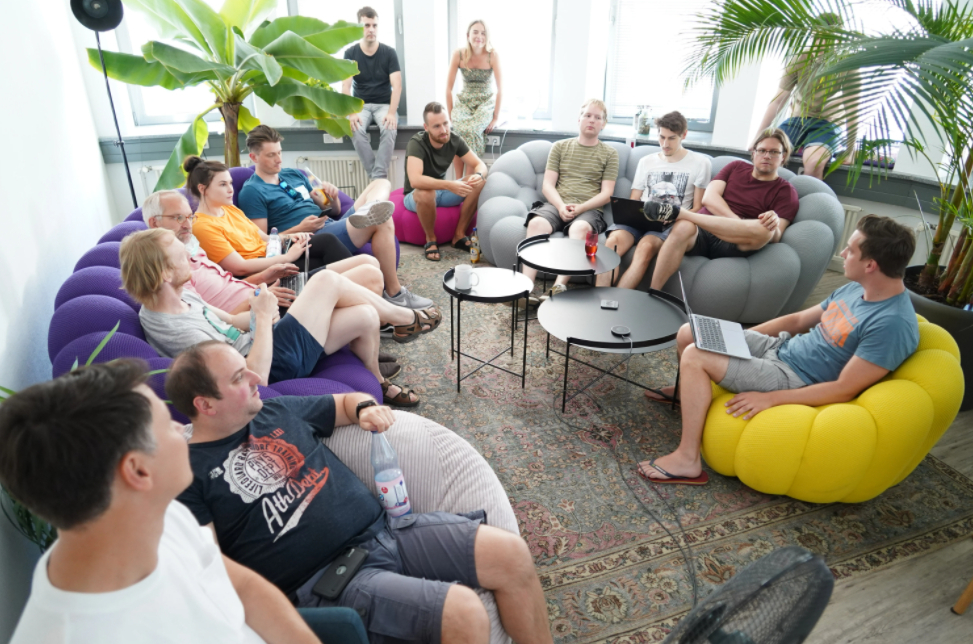 Find out what it's like to work at a thriving tech company in the vibrant city of Berlin through the eyes of Fabio, Estelle, David and Forrest.

keylight is a fast-growing software company and our ‘keylighters’ come from all around the world and from every walk of life. Each and every team member at keylight has the freedom to work according to their own rhythms - this has been particularly important during the current pandemic.

At 8am you will find Fabio, one of our newest developers, brewing coffee in the kitchen of our Berlin headquarters. Caffeine is a shared obsession at keylight, and not only is there always a steady supply of freshly brewed coffee, but also real British tea and, naturally, crates of Club-Mate (a drink which you grow to love if you move to Berlin). Early birds like Fabio may have already made their way to the coffee machine by 8am but keylight has no fixed working hours, and staff can pick and choose when to start and end their working days. 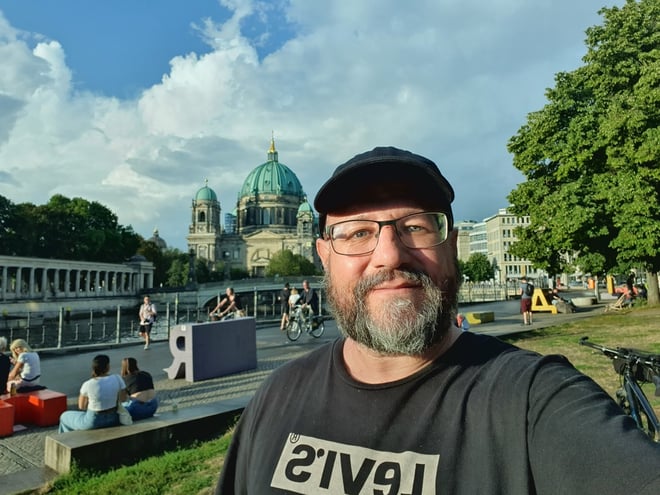 Prior to the pandemic, keylight’s Berlin office was a bustling hive of activity; these days things are a little quieter, as many of us spend more time working from home. This means that for staff who do choose to come into the office, like Solution Architect David, there’s plenty of space for everyone to practice safe social distancing. Working from home is sometimes challenging for David, who has a young family that was impacted by school and daycare closures. However, keylight’s flexible working policy means that it’s not a problem if David does need to work from home or leave early to take care of his children.

keylight’s staff are divided into five teams -  three teams of web developers, HR, Sales and a team for global services. The dev teams have daily stand-ups at around 10.30am, where team members discuss what they have done and what they will work on next; stand-ups are also an opportunity to ask questions, seek help, and bring up any problems. Each team is a relatively small group of people who work closely together, and each team chooses how to work, in terms of methods, meetings, meeting formats, and sprints. During the Friday ‘retro’ teams have the opportunity to discuss things which aren’t working well within the team and to try something new.

For Estelle, a front-end developer, working in a small team is one of the best things about working at keylight. Estelle has been working at home throughout the pandemic, but pre-covid her team had already grown used to working remotely to accommodate several parents and parents-to-be. This flexibility has been working out great for Estelle, who enjoys coming into the office but feels more productive at home. keylight’s flexible work arrangements also makes it possible for people to work remotely from outside of Berlin, which means that Estelle can go back to Paris frequently to visit family. 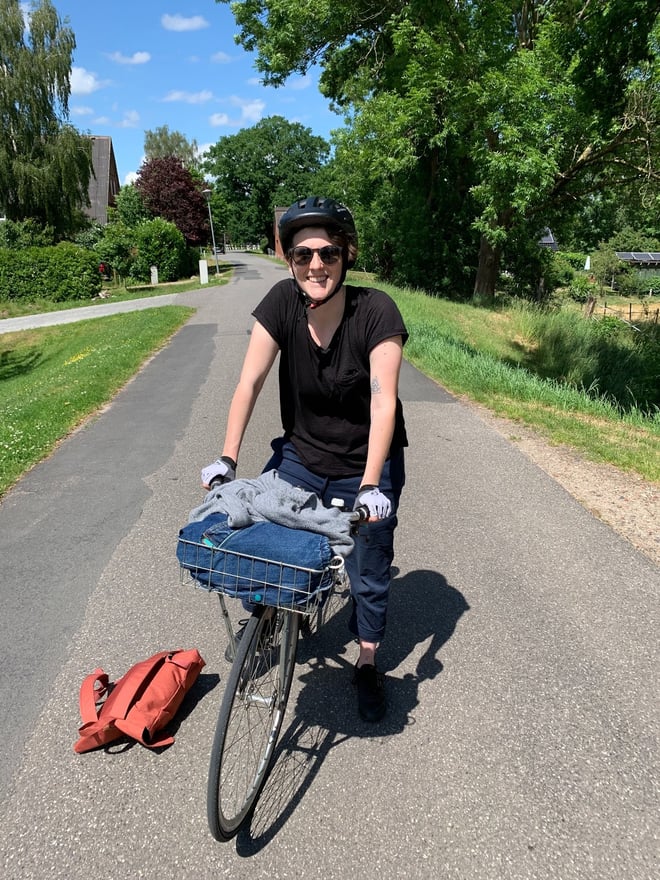 As well as staff members from Germany and other countries within the EU, some of keylighters have found themselves very far from home. Forrest is a front-end developer from New Zealand who has been living in Berlin for four years, after booking a holiday and deciding not to buy a return ticket. Known as the ‘Silicon Valley of Europe’, Berlin’s burgeoning tech start-up scene has attracted the best and brightest from around the world, particularly as many companies, like keylight, do business in English. ‘There are lots of job opportunities and interesting products and companies in Berlin,’ says Forrest. ‘Back in New Zealand there’s lots of work but fewer options in terms of diversity of choice’.

Our front-end developers work closely with our UX designer to develop the styling of the app, and make sure that keylight’s subscription commerce platform works on every device and browser. They can also customize the platform for individual clients, implementing branding, colours, different page structures, and new and custom features. Before his team’s stand-up, Forrest checks his emails, goes through requests on GitHub, responds to teammates about code and comments from clients, and then goes through Wrike (a work management platform which everyone at keylight uses on a daily basis) for new tasks. After the stand-up where the team discusses tasks for the day, most developers work independently, and aren’t interrupted by too many meetings. Fabio, who is a software engineer who works on server side programming and front-end development, enjoys the opportunity for autonomous, independent work. ‘I appreciate not having too many meetings,’ says Fabio. ‘I can focus on my beloved code.’

David is a Solution Architect, and works between developers and project managers to break down tasks from clients into tasks for the developers. At keylight, developers and solution architects have a great degree of freedom on what they work on and specialize in; David said he wanted to go more into coding, and his ideas and preferences were appreciated. After a morning of calls with the team, customers and working through tasks on Wrike, David usually joins the others in the office in search of lunch. keylight’s Berlin headquarters are at the so-called ‘Kanton-Strasse’, nicknamed such because of the large variety of various Asian restaurants in the vicinity. And of course, being Berlin, one is never too far away from a döner kebab. If you’re not in the mood for takeout, there’s always a chance that someone’s cooking up a storm in the kitchen. Aside from regular ‘keystück’ events, where keylighters take turns making breakfast for the office, you might catch Fabio whipping up something tasty to share.

Our offices have not only a diversity of nationalities, but also a diversity in educational background and experience. Several keylighters, like David and our CEO Marco Sarich, gained doctorates in mathematics before transitioning out of academia into the tech industry. Estelle has a licence in web design and accrued two years’ industry experience in front-end development as a working student whilst she was working on her Masters in Management; after she finished her studies she decided to stay in development, rather than management. Others, like Forrest and Fabio, have had more unconventional routes to the tech industry. Forrest has a degree in Accounting and Marketing, but learned web development through self study and a boot camp when he decided that accounting wasn’t his cup of tea. Similarly, Fabio also doesn’t have an academic background in Computer Science but has instead built up his knowledge and experience through learning on the job.

The tech industry is unique in its unusual acceptance of a diverse range of experiences and educational backgrounds; the doors are wide open for everyone to have an opportunity. Forrest and Fabio acknowledge that a university education may have provided valuable foundational knowledge, but there are also advantages to taking the path less travelled. ‘It’s faster to self-teach and get hands-on experience rather than going through a bachelor and masters, because a lot of academic study doesn’t have practical application’, says Forrest. Fabio agrees. ‘Learning by doing helps you learn fast and absorb knowledge faster, and the more you learn the more you want to learn. It’s addictive!’

It’s not all work and no play here at keylight. On Tuesday evenings you’ll catch many keylighters at Gleisdreick playing volleyball, and in the afternoons there’s always someone up for a round of kicker in our dedicated kicker room. keylight also hosts an annual staff retreat, although this year’s was unfortunately cancelled due to the pandemic. Beyond planned company recreational activities, most keylighters cite our relaxed and friendly office atmosphere and company culture as one of the best things about working at keylight. Fabio is one of our newest recruits, but fitting in to the company wasn’t too much of an ordeal. ‘Usually it’s pretty hard to fit into a company - you feel stupid all the time and everyone knows everything and you know nothing,’ says Fabio. ‘But everybody at keylight is so available and open and patient with questions that the learning curve has been very mild.’

The elephant in the room for the tech industry is that it continues to be a male-dominated sector, and it is often a struggle for women to be recognized for their accomplishments. ‘Everywhere I’ve worked has been overwhelmingly male,’ says Forrest, who also worked in the tech sector in Auckland. ‘Finding female developers is tough, but the tech industry would benefit from their point of view.’ Gender inequity in the workplace is a mammoth problem that won’t be solved overnight by a single company, but keylight is committed to including, elevating, and amplifying women; both in our existing staff and in our recruitment process. For Estelle, the problem is institutionalized into the ways in which young people are educated and encouraged to enter the tech industry, but she is hopeful that things are changing. ‘You’re educated to think STEM fields are ‘guys’ fields’ and if you try you aren’t going to succeed. But I think things are changing, and more girls are at engineering schools now than in my time. I would love to work with more women, and I would love to have more women mentors’.

Before I let the developers get back to their beloved codes, I ask them what they like the most about working at keylight. For David, the start-up scene was a logical next step after he completed his post-doc work, as he was looking for a job that was compatible with his values and was not interested in working for a large, faceless corporation. ‘Satisfaction is when you put in effort and there’s a challenge, and it all works out right’, says David. Forrest concurs. ‘I have the opportunity to craft the code my own way and see the finished product and it’s well made and well constructed. I craft something myself and on the finished website I can see the end product of my work’. For Estelle, opportunities to learn and work flexibly are important; ‘learning every day, not being bored, and always challenging yourself is important for staying happy at work’. For Fabio, working at keylight is the latest step in a long and interesting road that started in 1996, when he first heard that two computers could communicate with each other without being in the same building, and he fell down the intoxicating rabbit hole of coding. Decades of patiently building up experience and expertise has paid off, as his love of coding has led Fabio, who is originally from Brazil, to realize his dream of settling in Europe.  ‘Now I am settled in Berlin with my wife and daughter, and we have a nice life here.’

If you like the sound of working at keylight, we’d love to hear from you. Feel free to send in an open application to recruiting@keylight.de